Then and Now: The Changing Arctic Landscape is a traveling exhibit created by Ken Tape, a UAF graduate. The exhibit was structured as follows: 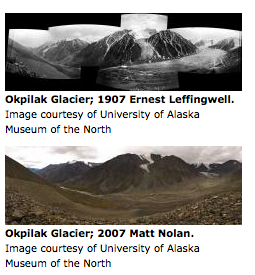 Ken’s inspiration for the exhibit came from his book, also called The Changing Arctic Landscape.

“A visitor to the Arctic might be struck by the apparent timelessness and constancy of the place, but that impression is misleading.’ –Ken Tape

I know Ken personally, and saw this exhibit at The Museum of the North. It is now traveling globally. The book is available locally, and I highly recommend it for any classroom in Alaska. The pictures are striking!