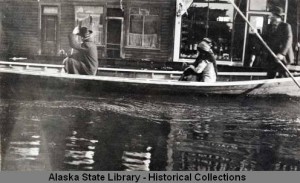 Drifting Down the Streets of Fairbanks during the Flood of 1905

Flooding is nothing new in Fairbanks.   June Allen reports that in 1905 the town was flooded when ice piled up against a bridge in Fairbanks, damming the river.   In order to save the town the bridge had to be dynamited, releasing the waters behind it.

I grew up in Fairbanks so I heard many stories about the flood of 1967. We lived out on Farmer’s Loop, so friends who lived in low-lying areas came and stayed with us, filling the house with people. Other people lived in my dad’s office at the University.   My dad tells stories about taking his riverboat into downtown Fairbanks to rescue food and other items from people’s homes.   When I was a child I remember seeing flood stains high on the walls of my elementary school classrooms and in other locations around town, but those physical reminders of the flood have probably all been painted over or torn down by now.   My parents make the flood sound like a long party and an adventure, but for people who lost their homes or their loved ones, it was a very different experience. 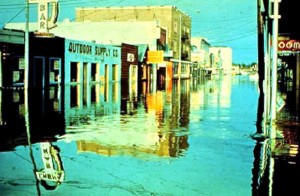 Fairbanks during the 1967 Flood

The 1967 flood was simply caused by too much rain.   Ned Rozell reports  that in August the jet stream tilts northward, allowing moist air to slip between the Kuskokwim Mountains and the Alaska Range (see map) and to reach Fairbanks without dropping all of its rains south of us.   This moist air then hits the Yukon-Tanana uplands and is forced upwards, cooling the air and causing it to drop its rain.   That makes August a rainy month in Fairbanks almost every year.   However 1967 was rainier than usual.

Neil Davis reports  that in July of that year a low-pressure zone to the north of Alaska and a high pressure zone over the North Pacific funneled moist air into Fairbanks, which got 3.34 inches of rain that month instead of the usual 1.84 inches.   My dad recalls gray day after gray day, the ground completely saturated with water.   Then in August the rains came, as they usually do, but more so.   That year (according to Neil Davis) a decaying tropical circulation pattern in the northwest Pacific brought an extra load of water, which got pushed up between the mountain ranges as typically happens in August.   Up near Chena Hot Springs, in the headwaters of the Chena River, 6.93 inches of rain fell in one week (Aug. 8-15th) far more than the 2 to 4 inches that usually fall there during the whole month of August.   Since this water was falling on saturated ground it could not infiltrate and had to run down into the streams that feed the Chena River.

On August 15th the water spilled over the banks of the Chena River and flooded Fairbanks, causing the loss of seven lives and about $80 -$200 million dollars in property damage (sources vary on this).   Close to 7,000 people were evacuated from their homes in downtown Fairbanks, going to live with friends in high places (literally) and in offices and classrooms at the University. 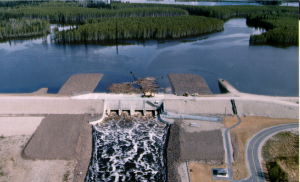 The Chena River Flood Control project was first authorized by the Flood Control Act of 1958, but it wasn’t until after the 1967 flood that action began to take place. Construction began on the project in 1970 and thedam and floodway were considered operational in 1979.   When Ned Rozell wrote his article in 2010 the Flood Control Project had been used fourteen times to lower the water level in the Chena.   Only once (in the spring of 1992) has water flowed all the way through the project and out into the Tanana.

The flood control project seems to be doing its job, but that doesn’t mean there are no floods in Fairbanks anymore.   In 2008 the Tanana River spilled over its banks west of Fairbanks downstream of the levees that protect downtown Fairbanks and the Airport.   Residents of Salcha experience flooding far more frequently, often because of ice jams up and dams the Tanana River during break-up in the spring, but also because of high rainwater events during the summer.   Before restoration projects removed culverts and replaced them with bridges along Piledriver, Twenty-three Mile and Chena Sloughs , flooding in these areas was even more common than it is today.