I took the picture below during a village gig that I got while working for a friend of mine who inherited The Drilling Company. Long story short–The Drilling Company was a subset of a civil engineering firm stationed out of Fairbanks, called Soils Alaska. Since Alaska is riddled with permafrost, our clients usually involved private and commercial entities interested in building on a piece of property and wanting to know if their building would soon sink out of site. The firm also handled lucrative environmental jobs which usually involved looking for, and defining, contamination plumes. When the engineer who built these companies decided to retire, the companies split–still working together but having to survive on their own; The Drilling Company started installing water wells.

I’ll speak chiefly on water wells in the Fairbanks area, but the information I provide is still valid throughout Alaska. One of the main concerns with establishing a private water well is that there is usually a septic system nearby. The Department of Environmental Conservation (DEC) has strict guidelines describing how a septic system should be installed so that the risk of contaminants breaching the water table is minimized. How high the septic system sits above the water table, and the materials used for the leech field, are the two main concerns here. DEC also regulates how the well should be installed,  so that the well itself is not the source of contamination. These regulations, in the wild lands of Alaska, are usually only applied to new home builders with bank involvement; DEC doesn’t run around checking everybody’s well and septic systems unless they have legal reason to. Regardless, nowadays it is pretty safe in most new neighborhoods. If you want to build, which usually requires successive bank loans on incrementally improved property, you’ll need proof that all of your water systems are legit.

The other main concern is the depth of the well. You pay by the foot when drilling; 30$ a foot is a rough average, so you don’t want to drill a well to 300 feet. Add to that the cost of installing the casing and a pump, and all that extra room for something to go wrong. The other side of the depth issue is the physics involved. If you have to drill deeper than about 29 feet, you will need to drill a wider hole so that you can fit a submersible pump into it because you won’t be able to “suck” water from this depth. A wider hole costs more money. In the flood plains of Fairbanks, depth is not an issue–the water table is typically around ten feet. In the higher parts of the hills where you are further from the water table, wells can be more costly, which is why many choose to forgo the well and haul their water. There are hopes though, I’ve seen aquifers and perched water tables in the strangest places; lucky for those who find them, but not as lucrative if too many others tap into this type of source since it can be much more responsive to well activity. 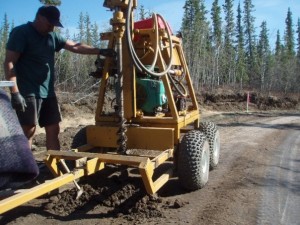 The village of Venetie, AK. Drilling with a mobile B24 during a soil investigation for a proposed road project.

← Mamma Has Baby Glaciers… More News at 11: The Juneau Ice Field
Permafrost: The Untold Water Sculpting From Below →

3 comments for “Well… I want my well to work well, so I stay well.”