Though hurricanes and sudden, torrential downpours do not threaten much of Alaska with the potential for devastating floods, other natural occurrences do.  Frequently, different areas around Alaska experience flooding due to very quick melting of snow and ice and/or quick rises of rivers’ and streams’ water levels due to spring melt and/or consistent, prolonged rain.

The Kenai Peninsula has experienced several floods in the past decade due to the Kenai River rising out of its banks.  Most often, this occurs when an ice jam occurs upriver and causes water, snow, and ice chunks to accumulate and overflow.  Ice jams can be caused by the sudden breakage of glaciers and ice (due to a rapid increase of temperature) at the head of the river; these often large chunks of ice flow quickly downriver and become jammed when they cannot successfully pass through narrow parts of the river.  The picture below portrays an ice jam that occurred on the Kenai River in January 2007.

The hazards of flooding in situations like this are that personal property on the banks of the river becomes damaged, as well as public property, such as docks and boat ramps.  This picture illustrates damage to a fishing platform at the Kenai River Center. 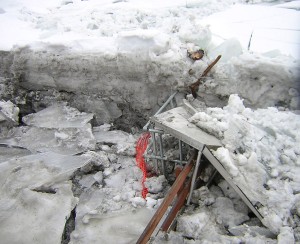