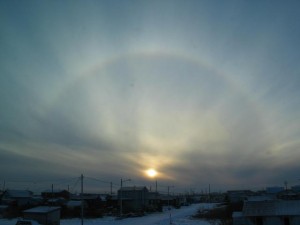 Many years ago, the nature-essayist Hal Borland wrote in his book Sundial of the Seasons that “Sun dogs and moon dogs are beautiful accents to a winter day or night as the rainbow is to a showery Summer day.” Sun dogs usually appear in pairs, and are loyal to the sun (as moon dogs are loyal to the moon), sitting on each side of the solar orb along a horizontal line through the solar disk. Sun dogs appear in January, April, August, and October, the month does not really matter, but they are most regularly seen close to their solar master during winter months when the sun is low in the sky and ice crystals in the atmosphere are more common, but we can see them in any of the other seasons whenever cirrus clouds fuzz the sky above.